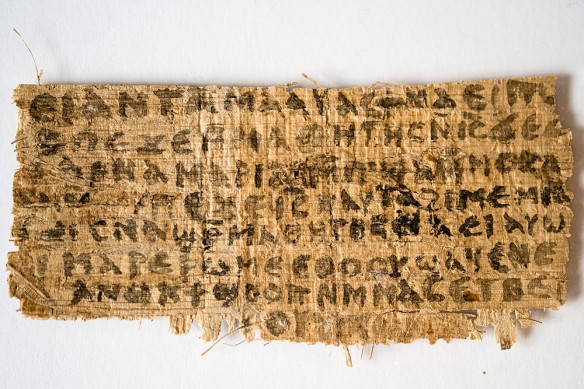 Karen L. King provides an analysis and discussion of a 4th century AD scrap of papyrus written in Coptic. The phrase “Jesus said to them, my wife” is the most interesting text as it supports the idea that Jesus was married. Her paper is available here.  The fragment with translation and transliteration can be found here.

An analysis of the impact of the phrase is found here. Alan Boyle, author of the piece, suggests that the fragment represents Gnostic Christianity rather than Orthodox Christianity.

A couple of things to note:

1- The text as we have it is from the fourth century AD–though the original may be earlier.  It tells us what some Christians of that period thought of Jesus, but does not necessarily tell us about Jesus of the first century.

2- It is a small fragment, without any context, making it very difficult to interpret.

3- The earliest first century documents about Jesus say nothing whatsoever about his marital status.