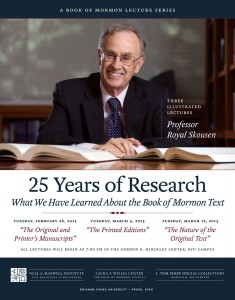 We reported a couple of months ago about three upcoming lectures by Royal Skousen that will be sponsored by the Laura F. Willes Center for Book of Mormon Studies and the Harold B. Lee Library. More details have been published on those lectures, as noted below.

Please note that seating will be limited to a first come first serve basis, and seating will fill up fast. It is advised to arrive no later than 6:30 p.m. to get a seat. The lectures will also be filmed, and made available at a later date.

25 Years of Research: What We Have Learned About the Book of Mormon Text

26 February 2013
“The Original and Printer’s Manuscripts”

Each lecture begins at 7:00 p.m.
in the Gordon B. Hinckley Center
at Brigham Young University

Concurrently on display
Materials and Artifacts from the Critical Text Project
L. Tom Perry Special Collections in the Harold B. Lee Library
at Brigham Young University

Abstracts for Three Presentations on the Text of the Book of Mormon
by Royal Skousen, Brigham Young University

“The Original and Printer’s Manuscripts of the Book of Mormon”

There are two manuscripts of the Book of Mormon: the original manuscript (O) and the printer’s manuscript (P). O is the dictated manuscript (the one the scribes wrote down as Joseph Smith dictated the text). Only 28 percent of O is extant, of which 25 of the 28 percent is held by the LDS Church. P is a copy of O made by Oliver Cowdery and other scribes. For five sixths of the text, P was used as the copytext by the 1830 typesetter, John Gilbert.

During February 1830, Oliver Cowdery took P to Canada in an attempt to secure the copyright to the Book of Mormon within the British realm. During that period of time, one sixth of the 1830 edition (from Helaman 13:17 to the end of Mormon) was set from O.

This lecture will cover all the major discoveries that have been made about the two manuscripts over the past 25 years. The original manuscript, despite its incompleteness, is the most important source for determining the original text of the Book of Mormon as well as providing crucial evidence on how Joseph Smith translated the book.

“The Printed Editions of the Book of Mormon”

The critical text directly compares 20 significant printed editions of the Book of Mormon, with 15 published by the LDS Church, 4 by the RLDS Church (now the Community of Christ), and one private edition in 1858 (published in New York City by James Wright).

In this review of the printed editions, I will identify the most innovative changes made in each of the significant LDS editions. There will also be a comparison of the LDS and RLDS textual traditions.

In the last part of the presentation, I will discuss various secular editions published within the last decade, including Grant Hardy’s 2003 A Reader’s Edition (University of Illinois Press), the 2004 Doubleday Edition (with text furnished by the LDS Church), and Royal Skousen’s 2009 The Earliest Text (Yale University Press).

“The Nature of the Original Text of the Book of Mormon”

This lecture examines the nature of the original text, as recovered by scholarly means as part of the Book of Mormon Critical Text Project. It is important, first, to note the number and kinds of changes that have been implemented in The Earliest Text (Yale University Press, 2009). Of 606 new readings in the Yale text, 216 come from the original manuscript (O), 187 from the printer’s manuscript (P), and 88 from both O and P.

The manuscripts play the most important role in recovering the original text. Since O is only 28 percent extant, this means that by human means most of the original text is not fully recoverable. Nonetheless, there are 241 new readings that make a difference in meaning; these changes would show up in any translation of the Book of Mormon. Various examples are discussed that show how the original text was more consistent in usage. In addition, a few changes in names make a difference in how we interpret the narrative.

The original text itself shows word-for-word control in its Hebrew-like expressions, the large number of lexical meanings dating from the 1500s and 1600s, its use of 131 instances of fully consistent expressions, identical non-biblical citations from different parts of the text, and the spelling out of the Book of Mormon names letter by letter. Even the non-standard grammar of the Book of Mormon may date back to Early Modern English.