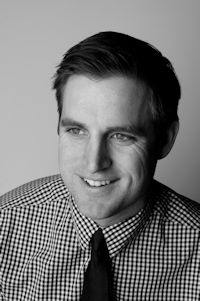 About the Interview: The First Vision is a podcast produced by the Joseph Smith Papers and published by the Latter-day Saint church, which is now available on the Joseph Smith Papers website and podcast syndicators. Our guest, Spencer W. McBride, wrote and hosted the show, which has proven to be wildly popular. During its debut week, it ranked in the top 25 of all podcasts on iTunes.
The format of the show is engaging and innovative, interspersing narration with interviews. Moving beyond the standard narrative, McBride elevates the discussion regarding one of the most familiar incidents in Latter-day Saint history as he urges listeners to view Joseph’s experience “through the eyes of a historian.”
Building on the familiar, guests provide additional context to the “unusual excitement” that encourages a young man to seek forgiveness for his sins in a nearby grove of trees.

About Our Guest: Spencer W. McBride is a volume editor of the Documents series of the Joseph Smith Papers. He earned a PhD in history from Louisiana State University. His research interests include the intersections of religion and politics in early America, and his book, Pulpit and Nation: Clergymen and the Politics of Revolutionary America, examines the political activism of Protestant clergymen during the American Revolution and in the early American republic.