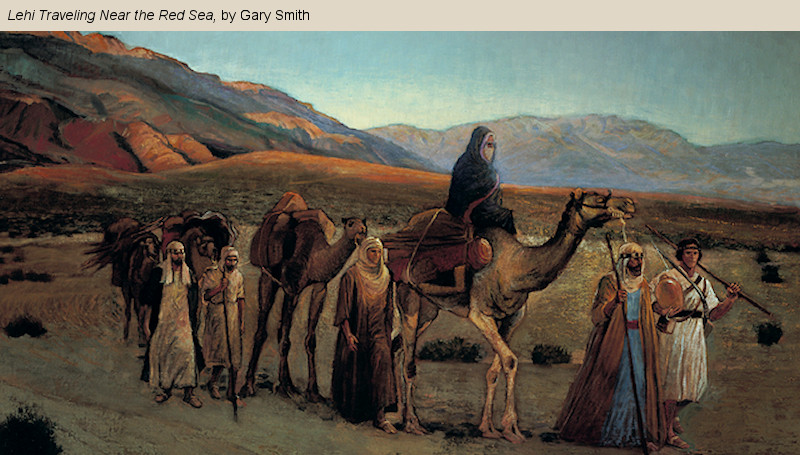 Nephi recorded the “things of God” (1 Nephi 6:3). As you study Nephi’s record, pay attention to the things of God you find, especially impressions from the Spirit.

1 Nephi 1: Nephi begins the record of his people—Lehi sees in vision a pillar of fire and reads from a book of prophecy—He praises God, foretells the coming of the Messiah, and prophesies the destruction of Jerusalem—He is persecuted by the Jews. About 600 B.C.

1 Nephi 2: Lehi takes his family into the wilderness by the Red Sea—They leave their property—Lehi offers a sacrifice to the Lord and teaches his sons to keep the commandments—Laman and Lemuel murmur against their father—Nephi is obedient and prays in faith; the Lord speaks to him, and he is chosen to rule over his brethren. About 600 B.C.

1 Nephi 3: Lehi’s sons return to Jerusalem to obtain the plates of brass—Laban refuses to give the plates up—Nephi exhorts and encourages his brethren—Laban steals their property and attempts to slay them—Laman and Lemuel smite Nephi and Sam and are reproved by an angel. About 600–592 B.C.

1 Nephi 4: Nephi slays Laban at the Lord’s command and then secures the plates of brass by stratagem—Zoram chooses to join Lehi’s family in the wilderness. About 600–592 B.C.

1 Nephi 5: Sariah complains against Lehi—Both rejoice over the return of their sons—They offer sacrifices—The plates of brass contain writings of Moses and the prophets—The plates identify Lehi as a descendant of Joseph—Lehi prophesies concerning his seed and the preservation of the plates. About 600–592 B.C.

1 Nephi 6: Nephi writes of the things of God—Nephi’s purpose is to persuade men to come unto the God of Abraham and be saved. About 600–592 B.C.

1 Nephi 7: Lehi’s sons return to Jerusalem and invite Ishmael and his household to join them in their journey—Laman and others rebel—Nephi exhorts his brethren to have faith in the Lord—They bind him with cords and plan his destruction—He is freed by the power of faith—His brethren ask forgiveness—Lehi and his company offer sacrifice and burnt offerings. About 600–592 B.C.

KnoWhys from Book of Mormon Central