Book of Moses Essays
#60: Moses Witnesses the Fall: (Moses 4)
The Willing and Unwilling Sons in the Council in Heaven
(Moses 4:1-4) 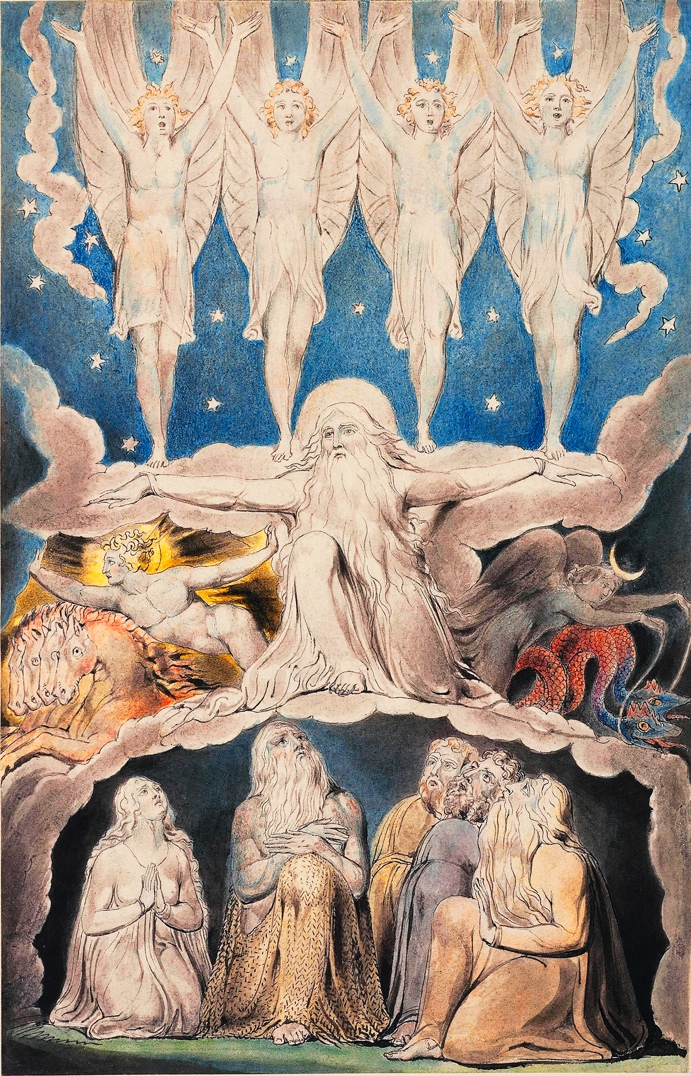 Figure 1. William Blake, 1757-1827: When the Morning Stars Sang Together, 1820. Where wast thou when I laid the foundations of the earth? … When the morning stars sang together, and all the sons of God shouted for joy?[1] Upheld by God’s outstretched arms, the stars and angels loudly voice their praises.[2] Beneath His arms, the sun-god Helios (or, alternatively, Logos, the horseman[3]) and Selene (or, alternatively, Wisdom, leading away Leviathan) represent day and night[4]— one of the many oppositions to which mankind is continually subjected.[5] Shut out from the glorious scenes on high, “Job, his wife and his friends kneel in a distinct, cave-like Earth below.”[6]

After a rapid sweep across the vast panorama of the Creation and the Garden of Eden in Moses 2-3, the scope narrows and the narrative slows to a more measured pace in Moses 4—and with good reason, for it is at this point that the purpose of Creation begins to unfold. John Henry Newman summed up a lesson from the combined accounts of the Creation and the Fall:[7]

It were better for sun and moon to drop from heaven, for the earth to fail, and for all the many millions who are upon it to die of starvation in extremest agony, so far as temporal affliction goes, than that one soul … should commit one single venial sin, should tell one wilful untruth, though it harmed no one, or steal one poor farthing without excuse.

Thus, the gravity of the innocent choice made in Eden—and of moral choices we make on a daily basis—outweigh in the eyes of God the entire amoral universe. Of course, the statement is not meant to drag us down into guilt, but rather to encourage us to use the gift of moral agency wisely. Stating the same truth taught by Cardinal Newman in a positive vein, President Russell M. Nelson said:[8]

Nothing is more liberating, more ennobling, or more crucial to our individual progression than is a regular, daily focus on repentance.

Significantly, Satan became Satan or, more accurately, Lucifer became the Devil not simply because he advocated a wicked, deceitful proposal in the Council in Heaven, but more fundamentally because he refused to repent while the prospect of repentance was still open to him.

In the uniquely informative account of Moses 4:1–4, the story of the two sons who appeared before the Council is told in remarkable brevity:

here am I, send me. Draper et al. note that this statement carries the intrinsic claim “that the speaker is in the right path, ready to do the Lord’s bidding.”[9] Likewise, Auerbach observes that the phrase is “not meant to indicate the actual place where Abraham is, but a moral position in respect to God, who has called to him — Here am I awaiting thy command”[10] Indeed, it is significant that in Midrash Rabbah this phrase is associated with the sure confirmation of Abraham’s priesthood and kingship:[11]

The fact that Satan’s intentions were already in direct opposition to God’s plan falsifies his claim of moral readiness, substantiating the scriptural assertion that the Devil is “a liar from the beginning.”[12]

Since Jesus Christ was already known by all to be God’s “Beloved and Chosen from the beginning” (v. 2), the fact that Satan sought to answer the call was in itself a direct challenge to the Father. Brent Top correctly concludes that “the Father’s question ‘Whom shall I send?’ was … a call for our commitment and common consent rather than a request for résumés.”[13] Satan’s self-centeredness is fittingly reflected in the wording of his proposal. With passionate rapid-fire delivery, he narcissistically repeats the terms “I” and “me” six times in the short span of half a verse.

I will be thy son. Compare Moses 1:19 where, in a rage, Satan actually claimed the role he was here denied.

I will redeem. Whatever Satan exactly meant by his proposal to become the “redeemer” of all mankind, it was doubtless very different from what the Savior offered. Elder Spencer J. Condie commented: “Because [the Devil’s] plan … required no Atonement for sin, … he could save his own satanic skin from any suffering.”[14]

all mankind, that one soul shall not be lost. Joseph Smith summarized the situation: “The contention in heaven was—Jesus said there would be certain souls that would not be saved; and the Devil said he could save them all, and laid his plans before the grand council, who gave their vote in favor of Jesus Christ. So the Devil rose up in rebellion against God, and was cast down, with all who put up their heads for him.”[15] A retrospective summary of the same discourse clarifies that the only ones that Jesus said he could not save (in one of the three kingdoms of glory) were those who sinned against the Holy Ghost—in other words, the sons of perdition.[16] Brigham Young affirmed: “None are condemned except those who have the privilege of receiving the words of eternal life and refuse to receive them.”[17] “God will save all who are determined to be saved.”[18] Ironically, Satan, the one who proposed a plan whereby no soul would be lost, became himself a soul who Jesus could not save. To him was given the name “perdition”—lost one.

surely I will do it. Satan seems not merely to be claiming that he will surely redeem all mankind, but also that he alone can do it and—even more arrogantly—that he can do it alone.

my Beloved. The phrase “my Beloved” is repeated twice in the verse, emphasizing the deep and personal regard of the Father for His Son. Contrast this with the distancing third-person reference that introduces the Adversary in verse 1: “That Satan.”

Father, thy will be done. Abraham 3:27 makes it clear that it was actually Jesus Christ who was the first to answer the Father’s request. In stark contrast to Satan’s speech, the Savior never once mentions the words “I” or “me,” being wholly focused on the will and the glory of the Father.

glory be thine forever. Jesus later contrasted His position to the one adopted by Satan: “He that speaketh of himself seeketh his own glory: but he that seeketh his glory that sent him, the same is true, and no unrighteousness is in him.”[19]

Lucifer and Jehovah as the Willing and Unwilling Sons

Satan’s duplicitous assertion of his moral readiness to fulfill the Father’s assignment, in contrast to the sincere proposition of Christ, seem to parallel the words of the two sons in Matthew 21:29-30, as first noted in the insightful analysis of John W. Welch.[20] To understand why this may be the case, note that the term “go” in the King James Version of the Bible, v. 30, is not in the Greek text, but is entirely conjectural on the part of the translators.[21] What if, instead of “go,” one supplied the words “Here am I” instead, which would have conveyed, thus rendered, the spirit of Lucifer’s response in Moses 4:1? Such a claim of moral readiness to do the Lord’s will would not only, in this case, be a good fit to the situation, but also would be consistent with both the original manuscripts of Moses 4:1 and also the corresponding Hebrew of Abraham’s response in Genesis 22:1 as we will now explain.

Observe that in Moses 4:1, both the OT1 and OT2 Joseph Smith Translation manuscripts have Satan saying “Behold I”[22] rather than “Behold, here am I,” as rendered in later editions. Likewise, in striking concordance with Joseph Smith’s wording, Auerbach asserts that the Hebrew word behind Abraham’s similar reply to God (KJV Genesis 22:1 “Here I am” = Hebrew hinne-ni) ought to be translated literally as “Behold me”[23] — or, as one might render it, less awkwardly, in French, “me voici.”

In light of all this, a reading for Matthew 21:29-30 consistent with this line of thinking might be proposed: 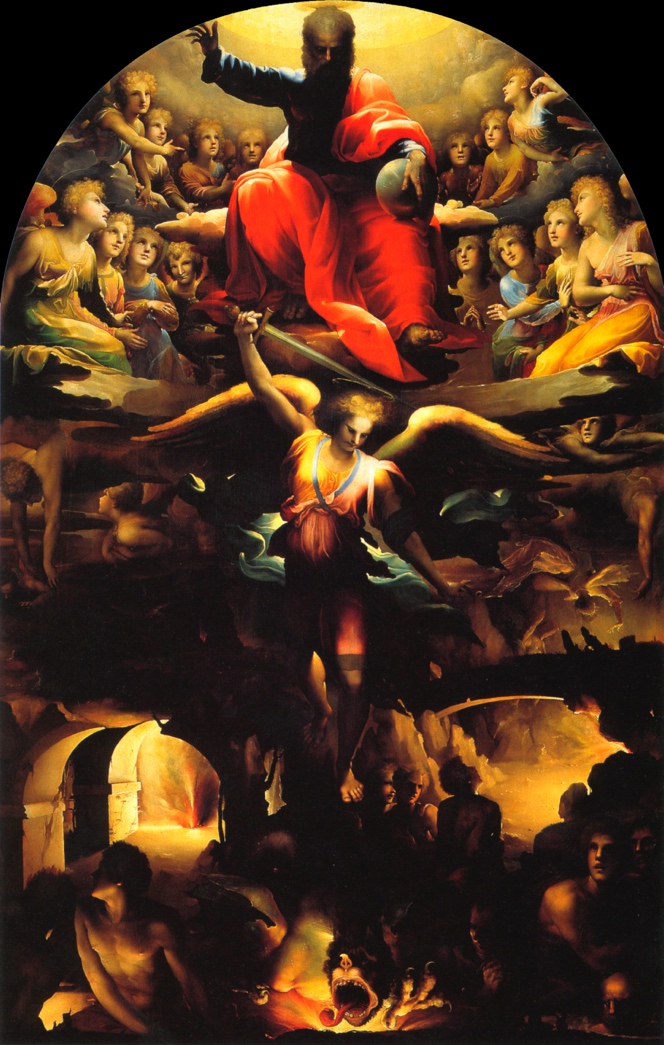 Figure 2. Domenico Beccafumi, ca. 1486-1551: The Fall of the Rebel Angels, ca. 1528. How art thou fallen from heaven, O Lucifer, son of the morning! How art thou cut down to the ground, which didst weaken the nations![29] This painting features God presiding, with right arm raised, over the expulsion of Lucifer and his angels from heaven. God “appears as a monumental figure, seated in judgment. The bright red of his voluminous mantle and the golden hemisphere behind him ensure that this figure dominates the composition as a whole. The angelic company is organized into an orderly choir of seated figures surrounding God, with only a few of their companions engaged in expelling the rebel angels. Saint Michael has been placed much lower in the composition and acts as the principal agent between heaven and hell. … [H]olding a sword above his head, he … appears in a pale pink and golden yellow tunic, tied across the chest with pale blue ribbons. Beneath him, the fallen angels recline in a series of subterranean vaults lit by sulphurous light. The Devil has been transformed into a snarling monstrous beast that has the appearance of a classical chimaera.”[30]

Satan Rebels and Is Cast Down

Satan rebelled against me, and sought to destroy the agency of man. Doctrine and Covenants 29:36 underscores the irony of Satan’s efforts to destroy man’s agency by pointing out that it was “because of their agency” that many of the “hosts of heaven” were permitted to follow him in rebellion.

that I should give unto him mine own power. Doctrine and Covenants 29:36 specifically equates the “power” mentioned here with the “honor” craved by Satan in Moses 4:1.

I caused that he should be cast down. Lehi records that an “angel of God … had fallen from heaven; wherefore he became a devil, having sought that which was evil before God” (2 Nephi 2:17). Although Moses 4:6 and Abraham 3:28 say only that “many” followed Satan, Doctrine and Covenants 29:35 (compare Revelation 12:4) is more specific. The Lord, speaking of Satan’s rebellion said that it was “a third part of the hosts of heaven” that he “turned … away from me because of their agency.” Of course, the mention of a “third part” is meant, to signal a rough qualitative division not a precise mathematical calculation. It is possible that the fraction did not come close to approaching 33 1/3%.

father of all lies, to deceive and to blind men, and to lead them captive at his will, even as many as would not hearken unto my voice. This is an “announcement of plot” for what will follow in the account of the Fall: Satan will lie to Eve in order to deceive her; her eyes will not suddenly be opened with the wisdom he promised, but rather she will become blind to her true situation, and she and Adam will be figuratively led captive in a vain effort to hide their transgression. All this because they did not hearken to the voice of the Lord.

Nelson, Russell M. 2019. We can do better and be better. In April 2019 General Conference, Church of Jesus Christ of Latter-day Saints. https://www.churchofjesuschrist.org/study/general-conference/2019/04/36nelson?lang=eng. (accessed June 17, 2019).

———. "Symbolism in the parable of the willing and unwilling two sons in Matthew 21." In Let Us Reason Together: Essays in Honor of the Life’s Work of Robert L. Millet, edited by J. Spencer Fluhman and Brent L. Top. Salt Lake City, UT: Deseret Book, 2016. https://rsc.byu.edu/let-us-reason-together/symbolism-parable-willing-unwilling-two-sons-matthew-21. (accessed August 25, 2020).

Figure 1. Photography and Rights Department, The Pierpont Morgan Library and Museum, RA 2001.76. Appreciation to Wayne Schrimsher for the digital scan.

[2] In praise of this depiction, Chesterton writes: “When [Blake] gets the thing right he gets it suddenly and perfectly right. … We feel that the sons of God might really shout for joy at the excellence of their own portrait” (G. K. Chesterton, William Blake, p. 21).