While any photographic likeness of the Prophet Joseph Smith seems to remain elusive ((R. Scott Lloyd, “Photo of the Prophet Joseph? Possible, but nothing so far,” Church News, October 27, 2012, http://www.ldschurchnews.com/articles/62895/Photo-of-the-Prophet-Joseph-Possible-but-nothing-so-far.html; “LDS Church issues statement regarding Joseph Smith image,” KSL, March 19, 2008, http://www.ksl.com/?nid=148&sid=2892497&pid=1)) or controversial at best, ((Jared T., “Book Review: Shall Millions Now Know Brother Joseph Again? (Part 1),” The Juvenile Instructor, 1 May 2008, http://www.juvenileinstructor.org/book-review-shall-millions-now-know-brother-joseph-again-part-1/. Also, Ardis E. Parshall, “That Daguerreotype Again (part 1 of 2),” Times and Seasons, May 2, 2008, http://timesandseasons.org/index.php/2008/05/that-daguerreotype-again-part-1-of-2/.)) other early Church leaders have had somewhat better luck. In early 2006, Patrick A. Bishop was studying images in the Library of Congress Prints and Photographs Division when he discovered a daguerreotype that caught his attention. (([Unidentified man, half-length portrait, with arm resting on table with tablecloth], DAG no. 1363, Library of Congress, Prints and Photographs.)) It had the appearance of Oliver Cowdery, and he reported his findings and research on this image in BYU Studies the same year. ((Patrick A. Bishop, “An Original Daguerreotype of Oliver Cowdery Identified,” BYU Studies 45, no. 2 (2006): 100–111.)) Bishop substantiated the image as Oliver Cowdery based on the shared locality of the daguerreotypist, James Presley Ball, and Cowdery, the dating of the clothing, age of the subject, comparing the face with other known images of Oliver, and descriptions of Oliver, among other things.

Further research by Bishop was reported in chapter seven of Days Never to Be Forgotten: Oliver Cowdery, published by BYU’s Religious Studies Center in 2009. ((Patrick A. Bishop, “Images of Oliver,” in Days Never to Be Forgotten: Oliver Cowdery, ed. Alexander L. Baugh (Provo, UT: Religious Studies Center, Brigham Young University, 2009), 123–43.)) Here Bishop reported more details of the travels of J. P. Ball, analysis of the clothing, a medical study, and two independent forensics specialists who studied the image. Both specialists found the Cowdery attribution very favorable, one of them concluding that it was “highly likely” that the image was Cowdery after comparing the image

All of the research thus far is circumstantial and does not prove absolutely that the person in the image is Oliver. Yet there has not been any evidence pointing to the contrary, and the image has been generally accepted as a genuine image of Oliver Cowdery. ((Bishop, “Images of Oliver.”))

Shortly after the 2006 publication in BYU Studies, the Mormon Historic Sites Foundation commissioned fine artist Ken Corbett to paint a new portrait of Oliver Cowdery based on this daguerreotype for the bicentennial celebrations of Cowdery’s birth, copies of which now reside in several locations in his commemoration. ((Bishop, “Images of Oliver.”)) The original painting was donated to the Church, and is now housed in the new LDS Church History Library just to the east of the Conference Center in Salt Lake City. ((According to the artist, Ken Corbett, on his website. http://www.kencorbettart.com/final/?page_id=96.))

Fast forward to October 2012. I read a fascinating article on TIME Magazine’s photographic LightBox blog entitled “A Vibrant Past: Colorizing the Archives of History.” ((Feifei Sun, “A Vibrant Past: Colorizing the Archives of History,” TIME, October 25, 2012, http://lightbox.time.com/2012/10/25/a-vibrant-past-colorizing-the-archives-of-history/#1)) To accompany a cover story on Lincoln, TIME commissioned Sweden-based photo editor Sanna Dullaway to recreate a handful of Lincoln’s photoed portraits as they might have appeared if they had been photographed today—in full color. Using modern technology, Dullaway worked in Photoshop to retouch and colorize some of the classic portraits of Abraham Lincoln (several other historic photographs she produced are also included in the collection on TIME’s site). The result is nothing less than stunning, adding a realism and vibrancy to the photographs that go a long way to bringing them into the present. Dullaway notes the effect her work produces:

History has always been black and white to me, from the World War I soldiers to the 1800s, when ladies wore grand but colorless dresses… By colorizing, I watch the photos come alive, and suddenly the people feel more real and history becomes more tangible. ((Feifei Sun, “A Vibrant Past.”))

I couldn’t agree more. The colorized images of Lincoln are quite remarkable in their ability to bring this singular historical figure to life, as if the photographs were taken yesterday (see here, and here, or click “View Full Screen” to browse through them all by the arrows). Dullaway is working on a book of Civil War images, all colorized, which will be fascinating when it is published, bringing to life this era which we’re so used to seeing through a black and white lens. ((Feifei Sun, “A Vibrant Past.” Also, Sanna Dullaway, “Work featured in TIME Magazine / I am working on a photo book presenting the American Civil War in color!” Forri Farg, accessed February 17, 2013, http://forrifarg.se/english-work-featured-in-time-magazine-i-am-working-on-a-photo-book-presenting-the-american-civil-war-in-color?lang=en))

A few days ago I recalled this article, and wondered if the same colorization could be done to photographs from Church history with the same dramatic effect. I don’t claim to be a Photoshop expert, but regularly work in Photoshop in my profession as a designer. I also recalled having read about the recently discovered daguerreotype that could be Oliver Cowdery. If it is Oliver Cowdery, as research and general consensus seem to suggest, it is perhaps the earliest photograph of a Church leader extant, thought to be taken in 1846. This, I thought, would be a good candidate for a test.

Over the last several days I’ve worked to restore the J. P. Ball daguerreotype, ((A high resolution TIFF image is available for download from the Library of Congress. https://www.loc.gov/item/2004664581/)) attempting to do the same quality retouching work as Dullaway. It was quite difficult. The original daguerreotype arrived at the Library of Congress in significant disrepair. ((Reproduction Number: LC-USZC4-10701)) It had a multitude of dust, dirt, scratches, yellowing, and other marks obscuring the image. After the Library performed a conservation process on the film, the image was enhanced, but still covered with considerable blemishes, some of which can only be seen on close inspection. This post-conservation image original is shown below. ((Reproduction Number: LC-USZC4-11325)) 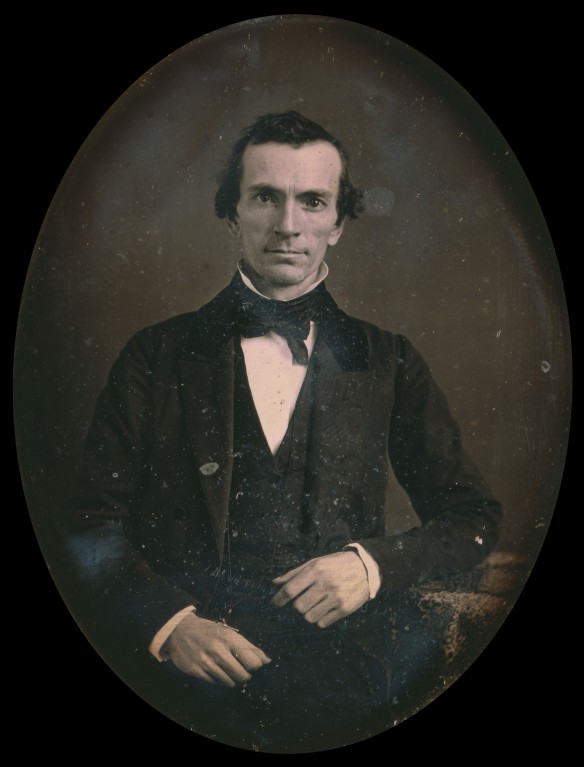 I took a number of steps to clean up and retouch the photograph, including adjusting white and black levels, removing thousands of dust particles and other debris, fixing scratches or other blemishes, retouching discoloration, and restoring lost details.

Then came the colorization. Even more than not being a Photoshop expert, I’m not a fine artist. I doubted my ability to add realistic color to the daguerreotype. I recalled Ken Corbett’s superb painting of Oliver Cowdery, which he based in form directly on this daguerreotype. Corbett’s color choices were certainly far better than anything that I could muster. I contacted Corbett and he kindly gave me permission to use his painting as a color foundation or base for the daguerreotype, utilizing the color values only to colorize most of the image. This method worked very well.

I continued to add final touches, such as the complimentary colored table cloth. I also expanded the rim of the image to make it rectangular. The final result, I think, is quite good, and helps bring to life Oliver Cowdery, this early Church figure and one of the Three Witnesses, if that is truly who is depicted. The final retouched and colorized image is shown below. Click on the image to see it in full resolution. 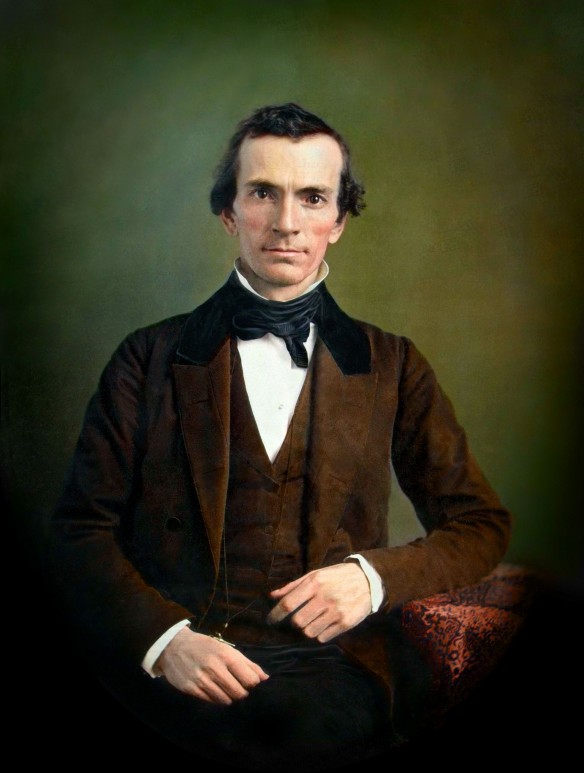 Some insights I gained from doing this restoration and colorization. First of all, it worked well, I think. The original damage was significant, and some grain was unavoidable (photographic grain), but it does help give the figure a much more lifelike appearance that could not otherwise be gleaned from viewing the original daguerreotype alone. This gets one step nearer to the what the man may have looked like in life.

Furthermore, some details became visible in the image that could not easily be seen in the daguerreotype. Foremost was the pattern on the bow tie. Some sections of the front of the bow tie clearly included a checkered pattern that had been obscured by discoloration in the daguerreotype, the bow requiring the most retouching. But upon close inspection, some of that pattern was able to be restored. It is not certain whether the pattern is repeated on the entirety of the bow, or only on the end. Additionally, the bow tie was probably of a silk type of material, because of its sheen. The black top collar of the suit coat was perhaps a black velvet material, also because of the way the material reflects light. It is not ascertainable whether the jacket and vest were brown, but that was the color choice of Corbett. It is possible these were a charcoal gray, dark gray or black, but differentiated from the collar because of the difference in material. I was intrigued to find significant realism in the hands, in particular, hands which perhaps transcribed much of the Book of Mormon as it fell from the lips of the Prophet Joseph. The hands had heavy horizontal scratches over them, but if carefully examined now exhibit blood vessels, bones, and thumbnails. A pocket watch, it seems, is clearly visible hanging from the vest. Perhaps the most arresting part of the image are the eyes, which show almost full irises in their penetrating gaze, large highlights, and are perhaps somewhat bloodshot. Other small details emerged which were not visible in the original, such as the rosy cheeks, accurately colored by Corbett, which would have been Oliver’s complexion as he suffered from tuberculosis during the last few years of his life. ((Bishop, “Images of Oliver.”))

I don’t claim that this is a perfect restoration, and many more artifacts could be cleaned from the image. But at some point, too much restoration begins to lose the essence of the original photograph. Additionally, sometimes it cannot be determined whether an element is an artifact or part of the original image. Nevertheless, I believe this is perhaps one of the best likenesses of the man we know as Oliver Cowdery, helping bring his likeness into the present with modern technology. Perhaps other early Church photographs could likewise be restored, an effort which I may attempt.