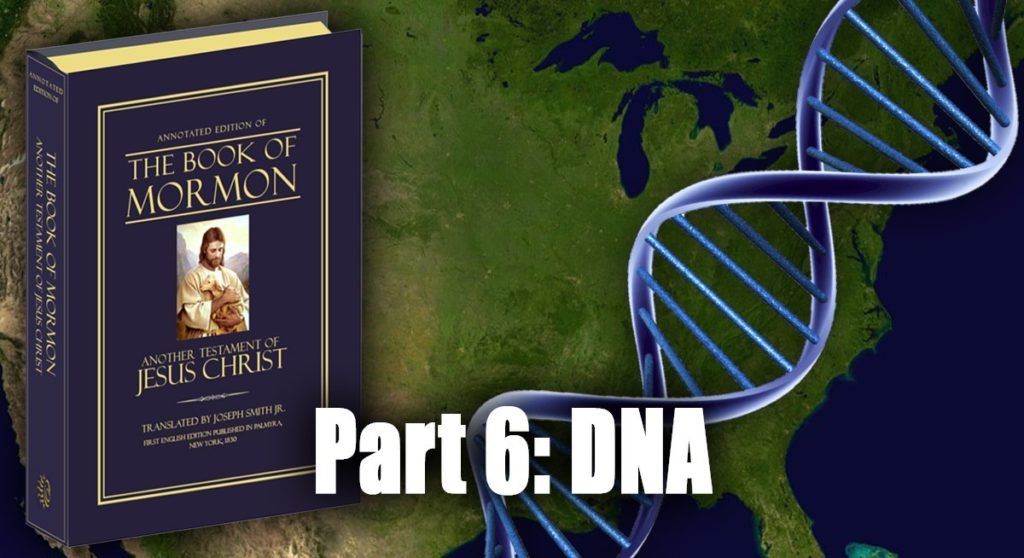 The Abuse of DNA Science

One of the foundational claims of Rod Meldrum for his “heartland” model of Book of Mormon geography is that modern science has verified a genetic link between native peoples of North America and those of the Middle East.[1] Meldrum uses this evidence to bolster his argument that the events described in the Book of Mormon took place around the Great Lakes region of the United States and that the remnant of Lehi’s seed can be identified with specific North American Indian tribes. As a corollary to this, Meldrum believes that this genetic evidence can be used to pinpoint the “prophecies and promises” made in the Book of Mormon and by Joseph Smith concerning the identification and restoration of Lehi’s seed in the last days.[2]

In spite of this, Meldrum (along with his co-editor David Hocking) invokes this same DNA evidence in the Annotated Edition of the Book of Mormon (554–555). They use a specific genetic haplogroup (X2a) to argue that the Hopewell Indians, like the Nephites, are “from Semitic (Caucasian/Jewish) lineages” (538). They also argue that Algonquian Indians share a genetic association with the Druze of the Galilee region of Israel (91). Finally, they use recent scientific discoveries related to the genetic makeup of Native Americans to vindicate President Gordon B. Hinckley, who in 2002 urged patience and caution on the matter of what DNA might say about Book of Mormon historicity (555).

The fundamental problem with the use of DNA evidence in the AEBOM is the same problem that has plagued Meldrum’s earlier efforts: the genetic evidence being cited by Meldrum is far too early to have any connection to Book of Mormon peoples and is not exclusive to the Middle East. This has been made clear by the scientific responses to Meldrum, and in fact is even made explicit in the sources Hocking and Meldrum cite in the AEBOM.

More recent scientific studies have confirmed this timescale for the entrance of haplogroup X2a into North America and have even explicitly mentioned the failings of Meldrum’s theory:

As I mentioned above, Meldrum is aware of these critiques. He has been made aware of them both face-to-face and in print by qualified scientists. For him to simply ignore these irreparable problems with his theory and proceed to package them for popular consumption in the AEBOM without even so much as attempting to refute them is utterly irresponsible and borderline dishonest.

For good measure, the AEBOM‘s use of DNA evidence to somehow prove the Heartland theory also runs contrary to the official position of The Church of Jesus Christ of Latter-day Saints. An article published in 2014 and revised in 2017 under the supervision of the First Presidency and Quorum of the Twelve Apostles makes it clear that “much as critics and defenders of the Book of Mormon would like to use DNA studies to support their views, the evidence is simply inconclusive. Nothing is known about the DNA of Book of Mormon peoples. Even if such information were known, processes such as population bottleneck, genetic drift, and post-Columbian immigration from West Eurasia make it unlikely that their DNA could be detected today.”

Hocking and Meldrum’s attempt to the use of DNA evidence in the AEBOM to confirm Book of Mormon historicity in the “heartland” therefore stands in opposition to both the scientific consensus and the official position of the Church.

[1] Rod Meldrum, Rediscovering the Book of Mormon Remnant Through DNA (New York: Digital Legend, 2009).
[2] Bruce H. Porter and Rod L. Meldrum, Prophecies and Promises: The Book of Mormon and the United States of America (New York: Digital Legend, 2009), 135–147; Rod Meldrum, Exploring the Book of Mormon in America’s Heartland: A Visual Journey of Discovery (New York: Digital Legend, 2011), 54–55.
[3] See the representative views in Bradley T. Lepper et al., “Civilizations Lost And Found: Fabricating History; Part Three: Real Messages in DNA,” Skeptical Inquirer 36, no. 1 (January/February 2012): 48–51; Jennifer A. Raff and Deborah A. Bolnick, “Does Mitochondrial Haplogroup X Indicate Ancient Trans-Atlantic Migration to the Americas? A Critical Re-Evaluation,” PaleoAmerica: A Journal of Early Human Migration and Dispersal 1, no. 4 (2015): 297–304.
[4] Gregory L. Smith, “Often in Error, Seldom in Doubt: Rod Meldrum and Book of Mormon DNA,” FARMS Review 22, no. 1 (2010): 17–161; Ugo A. Perego, “The Book of Mormon and the Origin of Native Americans from a Maternally Inherited DNA Standpoint,” in No Weapon Shall Prosper: New Light on Sensitive Issues, ed. Robert L. Millet (Provo, UT: Religious Studies Center, Brigham Young University, 2011), 171–217; Ugo A. Perego and Jayne E. Ekins, “Is Decrypting the Genetic Legacy of America’s Indigenous Populations Key to the Historicity of the Book of Mormon?” Interpreter: A Journal of Latter-day Saint Faith and Scholarship 12 (2014): 237-279.
[5] In early January 2017, Perego and Meldrum were among the participants in a retreat to the Zermatt Resort in Midway, Utah to discuss competing Book of Mormon geography theories. On that occasion, Meldrum presented his theory to the group then excused himself from the conference. After he left, Perego then delivered a presentation critiquing Meldrum’s theory. Meldrum returned to the conference later that evening and then “a very heated discussion” on the matter of DNA and the Book of Mormon ensued between Perego, Meldrum and other participants. Even before this time, Meldrum and Perego had corresponded personally with each other on multiple occasions, including “at least two or three” in-person consultations in Perego’s office at the Sorenson Molecular Genealogy Foundation in Salt Lake City, Utah on the question of Book of Mormon DNA studies and “the problems with [Meldrum’s] theory.” Personal communication, Ugo Perego to Stephen Smoot, May 20, 2019.
[6] These responses have been scattered across various blogs, message boards, emails, and YouTube video comments. For just one example of Meldrum being aware of and responding to the criticisms of his theory, see “An Open Letter to Rodney Meldrum #1” and “An Open Letter to Rodney Meldrum #2”.
[7] Raff and Bolnick, “Does Mitochondrial Haplogroup X Indicate Ancient Trans-Atlantic Migration to the Americas?” 298–299, citations silently removed. Note, incidentally, that Raff and Bolnick cite Latter-day Saint Ugo Perego in their study critiquing Meldrum.