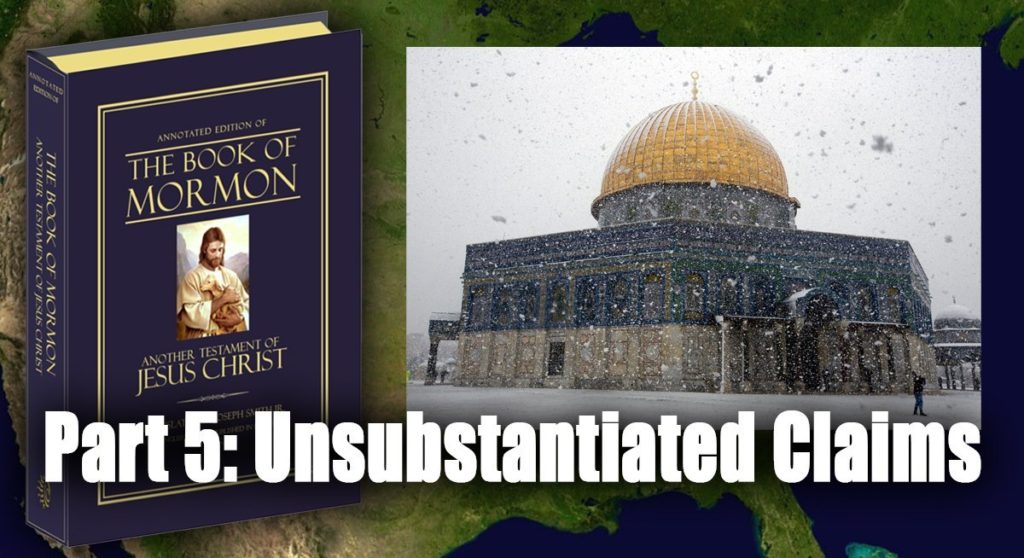 This is just a sampling of the kinds of unsubstantiated arguments and claims that are made in the AEBOM. Proponents of a North American “heartland” setting for the Book of Mormon will have to make much better arguments than these if they wish to make a convincing case for their theory. Making broad, sweeping, and often ignorant claims that declare victory against a Mesoamerican setting after imposing highly debatable readings of the Book of Mormon onto the text will not suffice.

[1] “Israel hit by snowstorms, gales in first big freeze of the winter,” YNetNews; “Jerusalem Closed Off as Blizzard Hits Israel; 17,000 Homes Without Power,” Haaretz; “Blizzards sweeping across the Middle East,” New York Post.
[2] A letter in the Cairo Geniza describes how the merchant Solomon b. Moses made a pilgrimage to Jerusalem from Egypt in the early 1060s. Solomon travelled from Egypt through the Sinai with a caravan along the coastal plain, then dropped into Jerusalem from Ramlah. According to the letter, a severe snow storm occurred in the month of Tevet, that is, December-January. He attributed his survival to the mercies of God. S. D. Goitein, ed. and trans., Letters of Medieval Jewish Traders (Princeton, N.J.: Princeton University Press, 1973), 159-60. Goitein interprets the letter as indicating that Solomon’s friends attempted to dissuade him from winter travel because the weather was bad, but that God blessed him and helped him complete his promised pilgrimage to Jerusalem. If so, this stands as additional, albeit indirect, evidence that things like snowstorms were not isolated occurrences. It is hard to see why snowfall heavy enough to impede travel could not be considered “driven snow.” My thanks to Allen Hansen for alerting me to this source.
[3] Even in the New World, although it is very rare, snowfall does occasionally occur in the highlands of Guatemala and central Mexico. See David Stuart and Stephen Houston, “Cotton, Snow, and Distant Wonders,” Maya Decipherment.
[4] See for instance “Weather in relation to Book of Mormon geography,” FairMormon Blog.
[5] Dana M. Pike and David Rolph Seely, “‘Upon all the Ships of the Sea, and Upon All the Ships of Tarshish’: Revisiting 2 Nephi 12:16 and Isaiah 2:16,” Journal of Book of Mormon Studies 14, no. 2 (2005): 12–25, 67–71.
[6] Kathryn E. Stoner et al., “Seasonally Dry Tropical Forest Mammals: Adaptations and Seasonal Patterns,” in Seasonally Dry Tropical Forests: Ecology and Conservation, ed. Rodolfo Dirzo et al. (Washington, D.C.: Island Press, 2011), 96, internal citations removed.
[7] John L. Sorenson, “Seasonality of Warfare in the Book of Mormon and in Mesoamerica,” in Warfare in the Book of Mormon, ed. Stephen D. Ricks and William J. Hamblin (Provo, UT: FARMS, 1990), 445–477.
[8] Joseph Smith, Letter to Emma Smith, 4 June 1834.
[9] Noah Webster’s 1828 dictionary defines “whirlwind” as “a violent wind moving in a circle, or rather in a spiral form, as if moving round an axis; this axis or the perpendicular column moving horizontally, raising and whirling dust, leaves and the like.” This could describe a tornado, or it could describe a tropical cyclone. The AEBOM‘s reading of this verse is begging the question.
[10] See for instance Oscar Velasco Fuentes, “The Earliest Documented Tornado in the Americas,” American Meteorological Society, November 2010, 1515–1522; Jesús Manuel Macías Medrano, Descubriendo tornados en México: el caso del tornado de Tzintzuntzan (Mexico: Centro de Investigaciones y Estudios, 2001); “Mexican Tornado (San Cristóbal De Las Casas, Chiapas, México) – 06-08-2014“.
[11] Amberli Nelson, Jehovah’s Holy Days in the Heartland of North America, available at www.bookofmormonevidence.org.
[12] Marco Festa-Bianchet and Steve D. Côté, Mountain Goats: Ecology, Behavior, and Conservation of an Alpine Ungulate (Washington, D.C.: Island Press, 2007), 7.
[13] Marc Montgomery, “Tracing the evolution of North American mountain goats,” Radio Canada International.