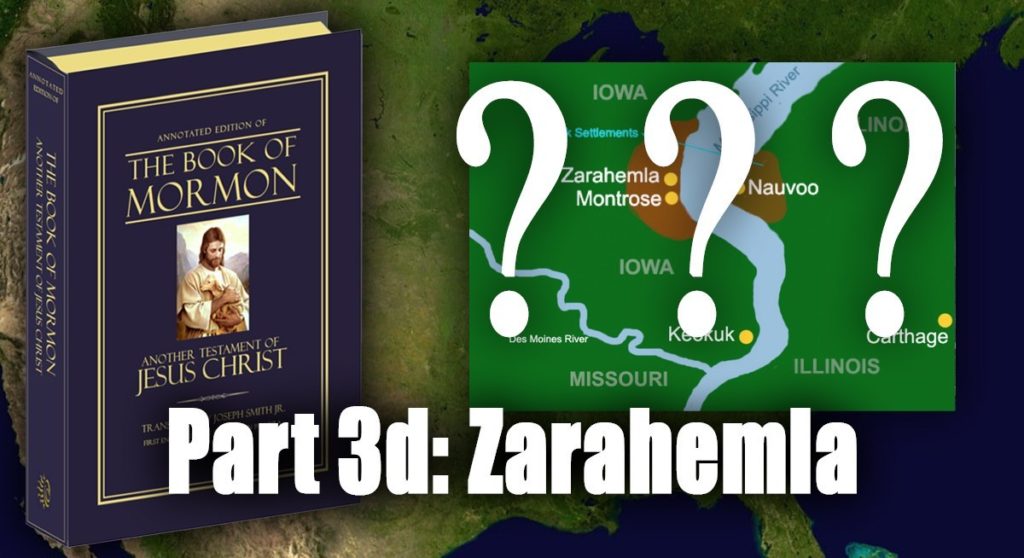 Once again, however, Hocking and Meldrum have badly misrepresented Pratt’s views on Book of Mormon geography. Not only in many missionary pamphlets and sermons (some quoted in previous posts) but also in the very same footnotes in the 1879 edition of the Book of Mormon, Pratt made it abundantly clear that he accepted a hemispheric geography for Book of Mormon events, and located key moments and locations from the Book of Mormon well outside of the “heartland.” For instance, 1 Nephi 18:23 (“And it came to pass that after we had sailed for the space of many days we did arrive at the promised land”) is footnoted with the comment “believed to be on the coast of Chili, S. America.” The Land of Nephi in Omni 1:12 is “supposed to have been in or near Ecuador, South America,” whereas Zarahemla in the next verse is “suppose to have been north of the head waters of the river Magdalena [in Colombia] its north boundary being a few days’ journey south of the isthmus [of Darien].” The river Sidon mentioned in Alma 2:15 Pratt identifies as “supposed to be the Magdalena.” Other geographical footnotes (at Alma 22:31; 46:17, 22; Alma 50:11, 29–30; 52:2, 9; Helaman 3:8–9, 1; 6:6, 9–10) make it abundantly clear that Pratt envisioned a hemispheric geography spanning North and South America.

That Hocking and Meldrum only selectively cite Pratt in those few instances where his views align with theirs is indicative of their overall methodological sloppiness.[2]

But the misrepresentation does not end with Pratt’s footnotes. In two places (329, 524) the AEBOM attempts to situate the Book of Mormon city of Manti in Huntsville, Randolph County, Missouri. The editors attempt this by citing the journal of early Latter-day Saint Samuel D. Tyler.[3] They give no justification for why Tyler’s speculative hearsay (there is no evidence that the identification of this site as the ancient city of Manti came from Joseph Smith, much less than it came from Joseph Smith by revelation) is in any way authoritative in identifying this Book of Mormon location. In fact, other contemporary sources contradict the idea that the site in Huntsville was anciently the city of Manti and instead indicate the location in question was to be called Manti at a future time.[4] Hocking and Meldrum have cherry-picked the historical sources they present in the AEBOM out of a transparent desire to shore up their preferred “heartland” theory.

Similarly, the editors of the AEBOM repeat the claim that Zarahemla is known by revelation to be on the Iowa side of the Mississippi river opposite of Nauvoo, Illinois (528–529, 553). Hocking and Meldrum, like other Heartlanders, see this as a “pin in the map” for their Book of Mormon geography model (529). But the evidence they cite (D&C 125:1–4) says absolutely nothing about Zarahemla (Montrose), Iowa being the ancient city of Zarahemla from the Book of Mormon. This is entirely a leap made by Hocking and Meldrum with no justification.[5] The settlement in Iowa called Zarahemla by early Latter-day Saints is no more the Zarahemla from the Book of Mormon than Nephi, Utah and Bountiful, Utah are the cities of Nephi and Bountiful from the Book of Mormon. Hocking and Meldrum ask rhetorically if “the Lord [is] suggesting the location of the Book of Mormon city” (529) but provide no evidence to answer this in the affirmative. They mere assume the affirmative and use this to establish their geography. In actuality, their question is what the journalist John Rentoul pithily dubbed a “Question to Which the Answer is No” (QTWTAIN).[6]

[1] This edition of the Book of Mormon can be read online for free at www.archive.org.
[2] Hocking and Meldrum fail to inform their readers that Pratt’s geography footnotes, including the one identifying Cumorah at Mormon 6:2, were removed in the next edition of the Book of Mormon printed by the Church in 1920.
[3] The 1854 Millennial Star excerpt from the “History of Joseph Smith” cited in the AEBOM is reliant on Tyler, thus effectively making Tyler the only source Hocking and Meldrum have for the claim that the ancient city of Manti was in Missouri.
[4] See the discussion in Matthew Roper, “Joseph Smith, Revelation, and Book of Mormon Geography,” FARMS Review 22, no. 2 (2010): 58–62; “How Much Weight Can a Single Source Bear? The Case of Samuel D. Tyler’s Journal Entry,” Journal of the Book of Mormon and Other Restoration Scripture 22, no. 1 (2013): 54–57.
[5] Matthew Roper, “The Treason of the Geographers: Mythical ‘Mesoamerican’ Conspiracy and the Book of Mormon,” Interpreter: A Journal of Latter-day Saint Faith and Scholarship 16 (2015): 182–185.
[6] Incidentally, Joseph Fielding Smith, who Hocking and Meldrum favorably cite throughout the AEBOM, said nothing about the Zarahemla site in Iowa as being the ancient Nephite city, and instead correctly recognized that it was merely instructed “to be called” such by Joseph Smith. See Joseph Fielding Smith, Essentials in Church History (Salt Lake City, UT: Deseret News Press, 1922), 268. The Church’s current manuals on the Doctrine and Covenants likewise say nothing about this location being the site of the ancient Nephite city. See Doctrine and Covenants Student Manual (Salt Lake City, UT: The Church of Jesus Christ of Latter-day Saints, 2002); rep. 2017.